In October 2017, Fr Brian McCoy SJ, the Provincial of the Society of Jesus in Australia, announced significant changes to the governance of Jesuit owned schools in Australia.

At the same time as announcing the move to incorporating the Jesuit owned schools, the Provincial announced the establishment of a new incorporated entity called Jesuit Education Australia (JEA). JEA is the member of the entity that operates Saint Ignatius’ College, Riverview. In turn, the Society of Jesus in Victoria, which is a legal entity of the Australian Province of the Society of Jesus, is the member of JEA. The Principal reports to the board of the school which in turn reports to the Province through its member, JEA.

The purpose of JEA is to:

Under our governing constitution, the Chair, Deputy Chair and directors of the board are appointed by JEA, taking into account nominations from the Chair of the board and/or the Provincial. The boards are non-representative bodies but in making appointments to the board JEA must ensure that there are directors with an appropriate range of skills, experience, and expertise including the ability to understand and competently deal with current and emerging issues in connection with Jesuit education. Before JEA appoints a Chair, Deputy Chair and/or director, it must seek the prior approval of the Provincial. Directors are usually appointed for an initial 3 year term.

The current directors of the board are:

Note: The Principal, Rector and JEA representative are not directors of the board. The position of Delegate for Education ceases with the commencement of incorporation.

JEA is also the entity that approves the appointment of a Principal, the annual budget, and the College’s strategic plan including its master plan. As with the appointment of directors, JEA must seek the prior approval of the Provincial for each of these matters.

The diagram below sets out the structure of incorporation governance: 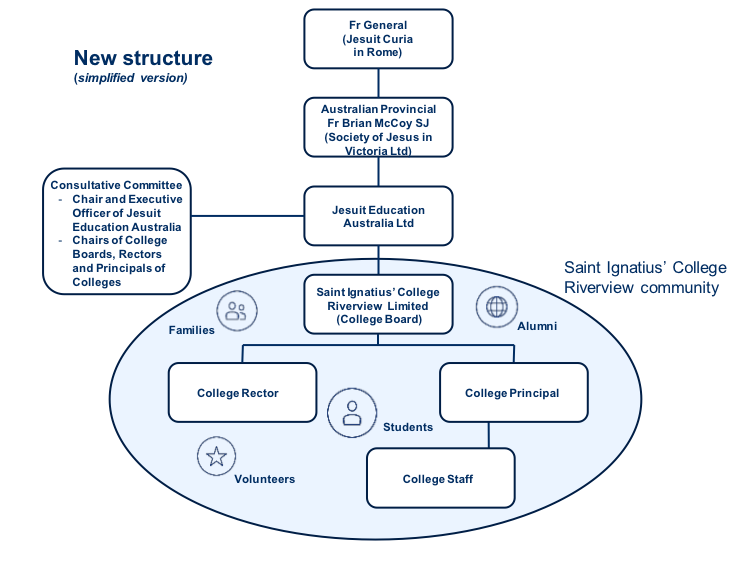 A significant aspect of this governance change is the ongoing importance of Ignatian formation of the board and the staff of the College and the importance of the principle of subsidiarity, meaning that issues should be dealt with at the level that is most appropriate for their resolution. Consequently, the board is specifically responsible for the following: